After I’ve significantly calmed down after the unboxing excitement this morning, I’m now able to write this review of Olive Edition Traveler’s Notebook. As I’ve written in preview post over at Urban Journaling about the Olive TNs, these beauties were released on Friday 3/24 Japanese time. Another predicted star product from Traveler’s Company, the Olive Edition had captured many green-lovers and TN fans’ hearts. I was able to get my hands on one of them by asking for a favor from my friend in Tokyo. She actually queued up the morning at Traveler’s Factory Nakameguro, before the staff arrived to open the store!

Her efforts were greatly appreciated, and I’ve been waiting for the package to arrive everyday since! (She posted it to me as soon as she can on Saturday) Today I was finally able to go to the post office and pick it up. Little did I know that the whole package came with a bunch of other goodies…

The Hobonichi Spring covers garnered a single post for itself, but I was obviously overwhelmed by all the wonderful things happening in the image. I’ve been yearning for a green Traveler’s Notebook from Midori (or Traveler’s Company now) since I first discovered this journaling method and the brand. This time Traveler’s Company finally granted my wish, in a lopsided way.

It’s not exactly green. I mean, it’s olive, but in a dusty, muddy, more moss brownish olive. Some might also describe it as camouflage army green. Let’s see how people’s Instagram flaunts stacked up:

And then I’m not sure again.

Everyone’s Instagram filter can be deceiving, so you can see I was pretty excited to finally see the Olive Edition in person. The green paper wrapping of the box is promising, but is definitely misleading about the real color of the notebook. 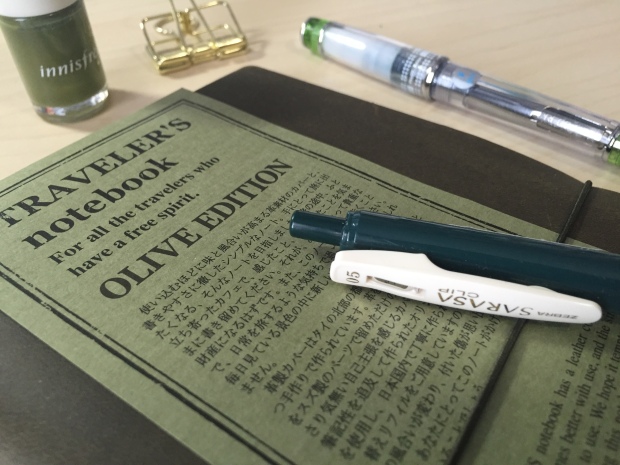 I wasn’t sure whether it is the lighting of my room or the gray overcast outside causing the gloomy color, but I wouldn’t call this Olive color green at all. The more I look at it, the more brown it seems. However, the texture of the leather feels amazing and smooth. To add to the experiment, I pulled out my brown traveler’s notebook for a quick comparison. The difference is more obvious now. 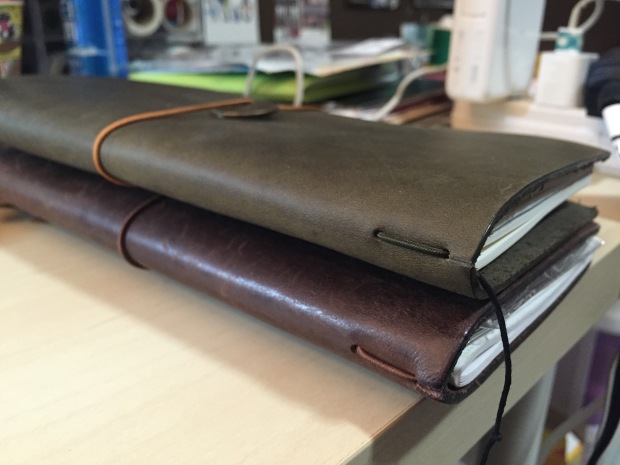 In an experiment to see what the Olive Edition looks like in all types of lighting, I made this collage, no filters. Kinda interesting to see how many shades one could perceive under different lights! 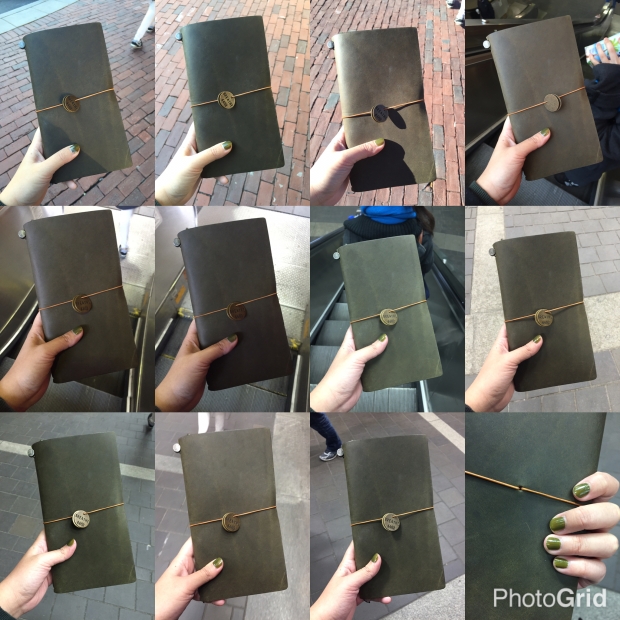 The Olive Edition has a mature and muted green to its coloring. I hope it will someday grow to be pretty and well-tempered like my brown TN.

The thickness is sturdy and flexible at the same time. Some people described the Camel edition as having a thinner texture than the standard black and brown, and on first touch I think Olive Edition feels the same as the Camel.

I swapped out the Olive rubber band and replaced it with Camel’s caramel colored band. I accessorized it with Tim Holtz’s charms: “Breathe” and “Inspire” are fitting words for me recently. Holding the notebook up to the light, it looks a bit brown-ish. I’m secretly hoping that the more I use it, the more of its lighter Olive color will show

I even painted my nails Olive green to match! In the background you’ll see that I have my Pilot Decimo ready and filled with Sailor’s moss green ink. This green baby is ready to go.

I wanted to use a special insert for this special cover, so I cracked open my Janis Little Girl Blue inserts. I’m pairing it with Keep a Notebook‘s number 04 Ruled + Section notebook (It’s a mossy green too!) 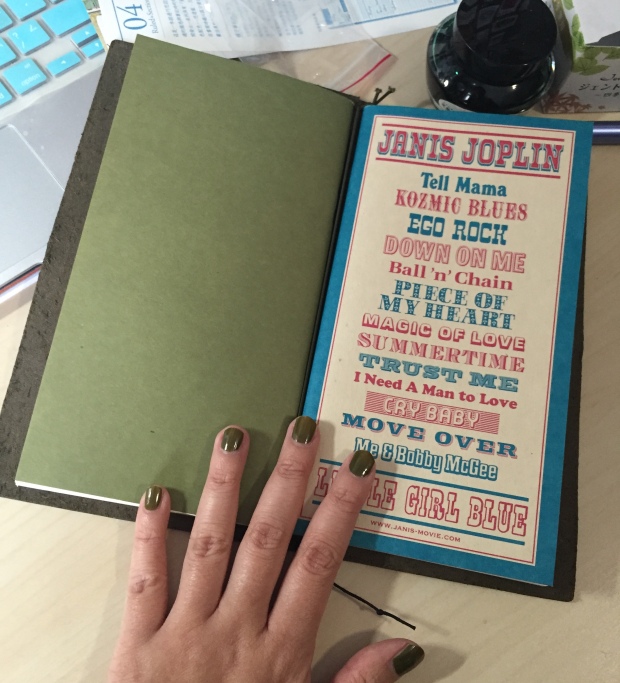 I’m planning to utilize this Keep-A-Notebook insert as a functional notebook for my study notes. I’ve yet to decide what to use Janis Little Girl Blue for. What do you guys think? Let me know what you all are planning to use your Olive Edition for! It’s going to be released worldwide starting April, look out for it!